The week beginning from November 19 to November 25 was punctuated with a huge dip in prices of most cryptocurrencies. Bitcoin, which seems to influence the price of other cryptos, was down by 36% throughout the week. Analysts have raised concern, this being the worst weekly in five years for the leading cryptocurrencies with regards to market capitalization.

Also, Ethereum, which had curved a niche for itself as the second best rated crypto after Bitcoin took a beating to remain at third.

On Sunday, November 25, prices of major cryptocurrencies took a further dip of around 10% which has not helped matters.

However, despite the negative sentiments from the markets, Bitcoin is set to overtake MasterCard in terms of the volume of transactions per day. This move is welcome as it may build impetus for a bullish momentum.

The pair took a 36% dip throughout the week. This loss is the worst weekly loss since the second week of April 2013. It also dropped a further 10% on Sunday. The coin opened trading at $5553 and closed at $3520, translating into a 36% loss. Analysts predict that the digital coin may be headed for its worst loss since 2013 where prices nose-dived from $165 to $91, representing a 44% loss.

The $4000 level was breached as prices gravitated downwards to establish a new support level at $3887.

The RSI is at the oversold region (below 30) for the first time since 2015, with coin hodlers looking to dispose of their Bitcoin holdings to avoid raking in losses.

Little buying activity also shows that investors are restraining from buying the ‘dip’.

Both the 30 day and the 9 day moving averages are trending downwards which indicates that the bearish outlook may go on for a while.

The altcoin solidified its grip as the top rated crypto after Bitcoin. This was due to Ethereum’s woes. The pair hit a high of $ 0.5101 and a low of $ 0.3673 as its stellar performance continued despite taking a loss as was with the case with most other alt coins.

Like Bitcoin, Ethereum took a severe dip, with prices pushing downwards. The $100 level was constantly tested although it was not breached. Prices hit a high of $ 177.18 and $110.83 on the lower side.

Fundamental news throughout the week indicated a secret plan by ETH developers to upgrade ETH’s network. This is to improve the capacities of the technology. CRYPTO IS COMING!

Hashpower migration from East to West could be a possibility 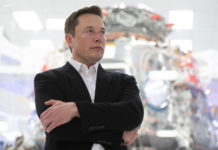 Elon Musk of Tesla and Dogecoin launches astronauts into the orbit