Over the last week of February 2019, the various Altcoins took a beating, with most of them dipping over the last few days. This is after the week began with bullish momentum before dropping slightly at midweek for cryptos generally. These drops in prices are attributed to price consolidation drives by the various coins. The various coins were coming off a slow bullish rally in which they were unable to break past the previous Resistance zones.

This week, the downward rally continued for most coins. Support zones were tested and breached as well which had an adverse effect on Investor sentiments.

Bitcoin started off the last week of February 2019 on a bullish trend before nose diving sharply then going up again. In the last few hour however, the largest digital coin by market capitalization has undergone a bearish rally and is now trading at $3698. This is the first time it is trading below the $3700 mark after finding consolidation above the $3500 mark.

At the moment, the 9 day EMA (B) is facing downwards while the 30 day EMA (C) is above it. This signals a bearish rally in the coming days. 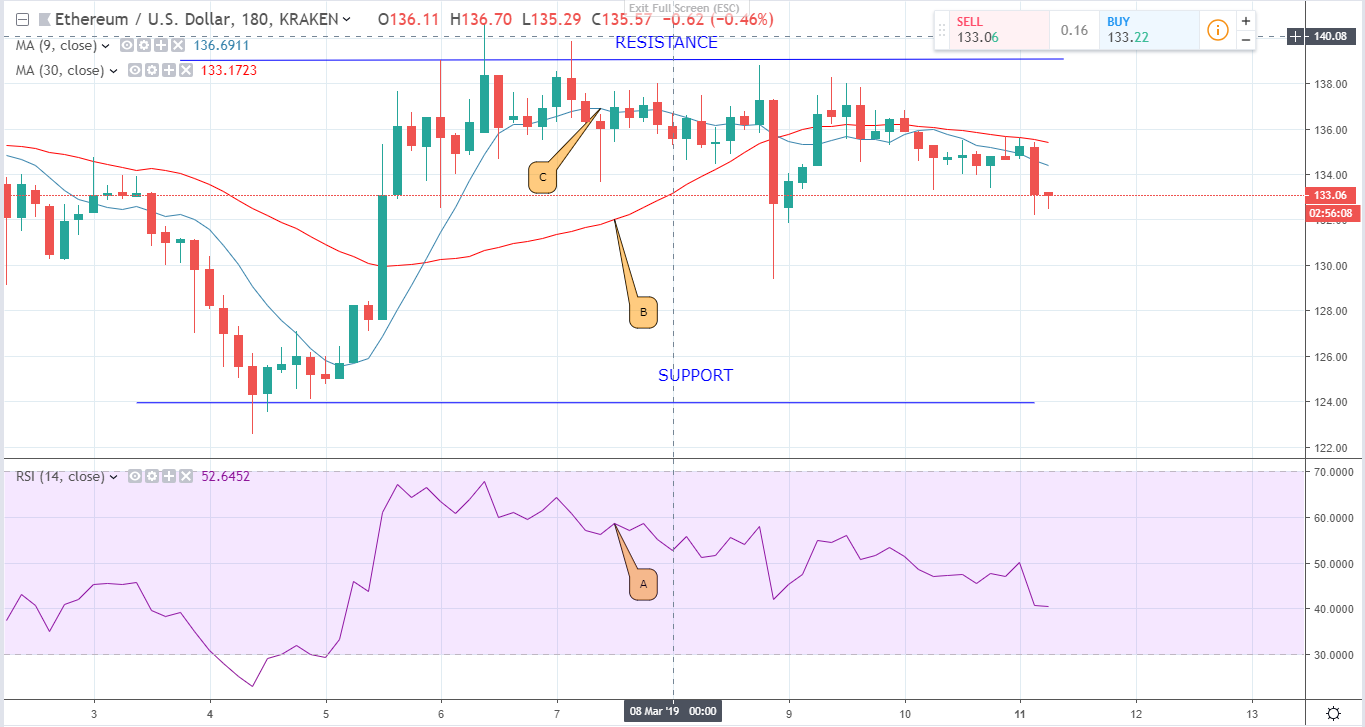 Ethereum has gone through the same price pattern as Bitcoin. It began the week on a bullish note and ended on a bearish rally. It has lost by 5.8%. This is after opening the markets at $137 against the current rate of $125. In the markets, the RSI (A) is at the ‘oversold’ area which shows that more and more people are looking to dispose of their holdings to avoid loss.

Throughout the week, the 30 day Moving Average (C) was dominantly above the 9 day EMA (B). At the moment, the 9 day EMA is facing downwards, forming a reverse contracting triangular pattern with the former EMA. This signals a bearish run in the coming days.

The LTC/USD pair brushed off the bearish rally that befell other cryptos to register an uptrend of 1%. It began the week trading at $45.3 and is now at $45.9. This upward movement pushed investor sentiments upwards as can be seen in the RSI (A) before it dipped with a dip in prices.

The bullish momentum in the markets pushed the previous support level from $43 to $44 while Resistance was tested and breached severally.

At the moment, however, the 30 day EMA (B) has crossed above the 9 day EMA (C) which signals a drop in prices in the near future.