Across the first week of March 2019, the various Altcoins put up a protracted Bullish movement. The week began on a bearish note which adversely affected investor confidence in cryptos. As the week wore on, however, the Bulls gained track in an upward price movement which breathed confidence to investors in the various coins. This was witnessed in the RSIs (A).

As a result of the bullish price movement, previous support zones have been bettered while points of resistance were tested and breached severally across the week. The various coins performed as follows:

The BTC/USD pair is up by 1.97% after it moved from $3790 to $3865 during the week. This bullish trend has held hitherto with all indicators signaling an uptrend.

As the week began, there were low investor sentiments which pushed the RSI (A) into the ‘oversold’ area. This was due to an unprecedented drop in BTC’s price. Investors were looking to dispose of their BTC holdings to avoid losses while others were looking to buy the dip.

Since March 5th, a strong uptrend has maintained with the 9 day Moving Average (C) dominantly above the 30 day Moving Average (B). The two have been moving in a contracting triangular pattern and are about to cross over each other. This shows a strong resistance for BTC breaking into the $4000 mark.

In the coming days, a bearish outlook looks likely. This is supported by the RSI (A) which is headed down and the 30 day EMA (B) which is about to cross over above the 9 day EMA (C).

A strong bullish outlook has maintained for the ETH/USD pair since the turn of the week. It is up by 4.96%, having started off selling at $126.91 against the current $133.21. This upward trajectory led to a skyrocketing of investor attitudes towards the coin. Most of them preferred to hold their coins. This is as seen in the RSI (A) which was near the under-bought/undersold zone on March 5th.

At the moment, the coin has dipped slightly which has led to a drop in the RSI. Also, the 30 day EMA (B) has crossed over above the 9 day EMA (C) which signals an impending downtrend. Unless the Bulls can up their momentum, a bearish rally is inevitable.

The LTC/USD pair began the week selling at $47.64 and is now at $54.56. This translates to a 14% increase in its price over the week. This uptrend pushed the RSI (A) into the undersold area severally between March 5th to 8th.  This shows high investor sentiments.

The 30 day EMA (B) has crossed over above the 9 day EMA (C) which signals a bearish outlook in the coming days. 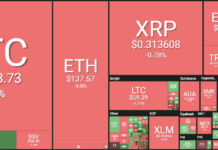 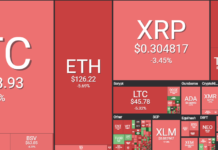 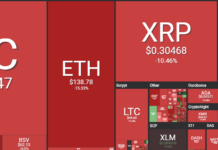 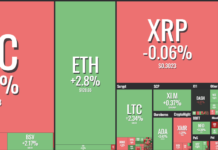 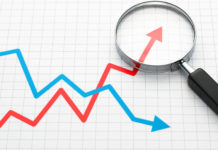 How to Stay on Top of the Market – Crypto Trends