HSBC Holding, a British multinational investment bank and financial services holding company that stands as the second-largest bank in Europe behind BNP Paribas with total equity of US$206.777 billion and assets of US$2.958 trillion as of December 2021 has entered the Sandbox to disrupt and etch its name on golden templates.

A year ago, the multinational investment bank had $10.8 trillion in assets under custody (AUC) and $4.9 trillion in assets under administration (AUA), respectively. The origin of this notable financial service holding company also traces its origin to Hong Kong, where its present form was established in London by the Hongkong and Shanghai Banking Corporation to act as a new group holding company.

Being a purpose-driven organization, HBSC is set to open up a world of opportunity as well as achieve great strides which explains why it exists. HBSC has strategically positioned itself to use its unique expertise, capabilities, breadth, and perspectives to open up new kinds of opportunities for its customers.

According to the organization, it’s bringing together the people, ideas, and capital that nurtures progress and growth, helping to create a better world for its customers,  people, investors, communities, and the planet it shares with the world at large. Listed on the London, Hong Kong, New York, and Bermuda stock exchanges, shares in HSBC Holdings plc are held by around 187,000 shareholders in 128 countries and territories.

Set the Deal on Fire

Remarkably, the institution can be said to have had little or no proper idea about the Cryptocurrency industry until recently. The financial institution will be making a striking feat to collaborate with The Sandbox to foray into the metaverse. While this process evolves, the institution posits that the partnership hopes to promote financial literacy via gamified experiences within the metaverse as it will develop opportunities for users to engage with sports, esports, and benefit gaming enthusiasts within the broad spectrum. The intention further reveals that it also hopes to buy a virtual plot of LAND within The Sandbox for an undisclosed amount.

Let’s get the Laser Clearer

As it makes its stride, the banking giant will reportedly focus on financial literacy offerings and “work with our sports partners, brand ambassadors, and Animoca Brands to co-create experiences that are educational, inclusive, and accessible. Going further, this partnership comes at a time when many financial institutions are closing physical branch locations due to the shift to digital banking, which was accelerated by the pandemic. According to Cointelegraph which spoke to the recently appointed U.S. CEO of The Sandbox, Mathieu Nouzareth, about his vision for banking in the metaverse, they stated that :

“Financial literacy is a major obstacle to building healthier, more equitable financial futures. The gaming component of The Sandbox is ideally suited for engaging customers and curious onlookers about important financial concepts in an interesting and novel way.”

Lastly, Animoca Brands, the parent company of The Sandbox, tweeted that HSBC is joining over 200 existing partnerships operating in the metaverse. Other major brands working with The Sandbox include The Warner Music Group, Adidas, Ubisoft and a host of others.

It’s been quite a busy start for the year for the NFT marketplace and for the Metaverse with the increasing number of companies and organizations joining the space. After Facebook rebranded itself into Meta in early November, predictions were however made that the metaverse market could reach $8 trillion with high hurdles to adoption. Recently, news had hit the wires of Warner Music Group going Metaverse with a Sandbox (SAND) theme park. Last month, retail titan Walmart also filed several metaverse-related trademark applications, intending to offer a selection of virtual goods.

Nike and Adidas, major sportswear companies, have also jumped on one of the hottest trends in tech. Clothing and accessories retailer Gap has also launched its own NFT collection. Meanwhile, entertainment behemoth Disney is hiring an NFT expert.  In Lieu of these emerging trends, regulatory scrutiny is unlikely to abate any time soon, mainstream companies will likely continue to enter the Metaverse. Unlike the adoption of blockchain technology and digital assets, firms appear to be more actively exploring the Metaverse and NFTs.

What’s in the Offering

Overnight, news hit the wires of U.S fast-food chain McDonald’s partnering with Humberto Leon to roll out a Zodiac collection within the Metaverse. The collaboration is in recognition of the Lunar New Year and the Year of the Tiger. The world’s largest restaurant chain has filed ten applications to offer virtual goods with home deliveries and beverage products in the form of downloadable media files that will contain non-fungible tokens (NFTs). Fans can also relax in the McDonald’s lounge. The lounge features a lantern display and fans can light their own lanterns to release into the sky.

As reported by U.Today, Prior to this time, Elon Musk, the world’s richest person, recently nudged the fast-food behemoth to accept meme cryptocurrency Dogecoin, promising to eat a McDonald’s Happy Meal on television. The fast-food chain laughed the offer off, by asking Tesla to add support for fake cryptocurrency.

McDonald’s also started trolling the cryptocurrency community in the wake of the crypto crash that took place in January. Now, they are a part of it and it’s a smart move made by the multi-billion dollar company to win the hearts of its consumers, showing how committed they are to go along with the new strides.

Josh Gerben, a trademark lawyer whose firm tracks new trademark filings on a daily basis, first made note of the requests on Twitter, pointing out 10 applications filed by McDonald’s. It’s good to note that the request made by McDonald’s often takes the U.S. Patent and Trademark Office eight to nine months to review, according to Gerben, though he says Mcdonald’s should have no troubles getting the trademarks approved.

While the Metaverse is not the only virtual world in which these trademarks can be used, Meta appears to be leaning more heavily into its vision of a virtual world than any other major technology company and it is seeing results. According to Meta’s fourth-quarter earnings report, the company pulled in more $800 million in revenue from “Reality Labs,” its division that includes its augmented and virtual reality-related consumer hardware like the Oculus, the company’s widely popular VR headset used to access the metaverse. 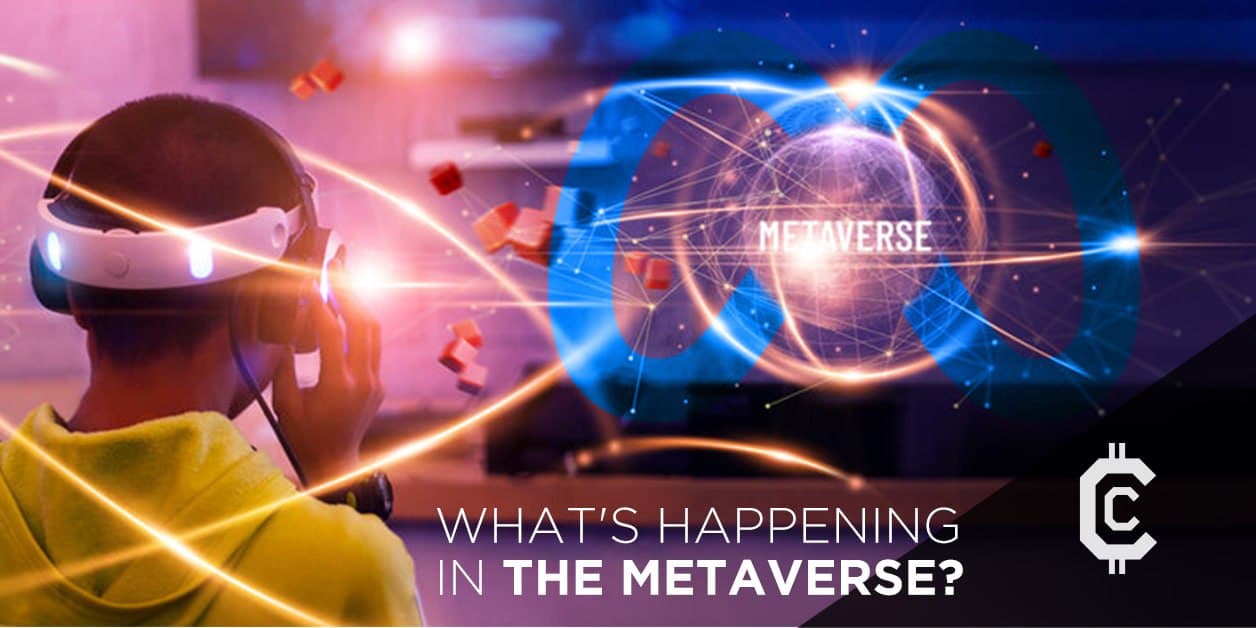 The metaverse is arguably the biggest trend in the blockchain world. Several organizations have signed up or indicated an interest in joining the digital revolution. Here’s a series of recent updates from the metaverse community.

Sandbox said in a statement that the collaboration would result in the first music-themed concert in its game universe. The Warner Music Group’s LAND will serve as a platform for regular musical performances by its roster of gifted singers. Although Warner Music Group has dominated the music industry for decades, this would be the company’s first foray into the NFT metaverse.

Almost every endeavor now has a home in the metaverse. The music industry, on the other hand, has yet to be completely represented. With this alliance, though, all of that is about to alter. The Sandbox also stated that it would collaborate closely with WMG to help coordinate its digital property in order to deliver high-quality musical experiences for the metaverse.

Meta, Facebook’s parent corporation, announced that its freshly built artificial intelligence (AI) “Research SuperCluster” (RSC) will open the path for a greater metaverse adoption According to a Monday post announcing the hardware, Facebook estimates RSC is already one of the world’s fastest supercomputers and will take the top rank when it is up and running in mid-2022.

“The experiences we’re building for the metaverse require enormous compute power (quintillions of operations/second!) and RSC will enable new AI models that can learn from trillions of examples, understand hundreds of languages, and more,”CEO Mark Zuckerberg remarked in a post.

According to Meta, “Developing the next generation of advanced AI will require powerful new computers capable of quintillions of operations per second.” However, Meta did not reveal the location of the computer or the costs of its research and manufacture. It also noted the machine would have advanced features and will be able to process several natural languages and recognize speeches.

Apple invests in the metaverse

Another big metaverse news came from Apple, a global gadget company.  During a recent call, Apple’s Tim Cook was quizzed on his thoughts on the metaverse and he said, “we see a lot of potential in this space and are investing accordingly.” Shortly after the call, Apple’s stock significantly jumped.

Unlike Meta, which has gravitated towards the use of the Oculus Rift to engage people in the Metaverse, Apple is betting big on augmented reality. Apple had planned to introduce a headset in 2022,  but such plans could reportedly be postponed due to hardware and software issues.

Adidas has entered the crypto space with a partnership with Coinbase and the metaverse playground The Sandbox announced this week.

The agreements have been kept under wraps so far, but they represent the powerhouse apparel company’s first major entry into crypto and the thriving blockchain space.

Adidas, the well-known sportswear firm, recently took to its Twitter page to excite its community with the news of a collaboration with Coinbase, which it described as “probably nothing.”

Several top brands have made the move to liaise with crypto projects, and the  German sportswear behemoth may be one step closer to accepting digital asset payments and making the first foray into “metaverse gear.”

Adidas is rumoured to be partnering to facilitate crypto payments for the sportswear company, potentially introducing a digital asset payment gateway to the Adidas community.

Sandbox, a virtual Metaverse initiative, tweeted at Adidas recently, directing users to a 144-parcel Adidas Original place on its platform. Sandbox proposed a deal in which the two entities co-design their future.

After Adidas tweeted that it would be establishing an “adiVerse” utilizing the Metaverse platform, SAND, The Sandbox’s native coin, surged. Pieces of property on The Sandbox were purchased by the sportswear giant, showing its seriousness in the metaverse.

Nike’s Foray into Crypto in Sports

While Adidas may be dabbling in the non-fungible token (NFT) industry, it would be following in the footsteps of its competitor Nike, which is attempting to bring its sneakers to the Metaverse.

Adidas has long trailed behind companies like Nike, which recently teamed with Roblox on a virtual branding project called ‘NIKELAND.’ Nike also has a long history with patents, with numerous recent requests to the US Patent & Trademark Office indicating that the company may be expanding its footprint in NFTs and the metaverse. In late 2019, the leading sports gear manufacturer was granted a patent for “CryptoKicks.”

This will not be Coinbase’s first collaboration with a sports or esports group. The crypto firm has been leading a crypto adoption in the sporting community and has announced several partnerships in the past. They formerly collaborated with Team Liquid, one of the top professional esports teams in the world.

Excitement in the Air

It’ll only be a matter of time before other brands adopt cryptocurrency and embrace the Metaverse concept. Overall, the Adidas and Coinbase relationship is a win for crypto traders, implying widespread adoption is a foregone conclusion.