Things keep getting exciting at the NFT front.

One of the biggest names in the Cryptocurrency arena, Binance has now decided to launch a decentralized NFT platform by the name “Featured By Binance”. The aim of the platform combined with Binance’s vision is to provide a non-custodial, on-chain platform in order to facilitate a holistic lifecycle for creators, their brands, and most importantly their fans.

Binance has aggressively put its foot forward in this space as it is looking at using its vast experience in launching tokens and creating markets in the NFT space. The platform will assist its brand partners to launch digital NFT assets in the marketplace to trade the assets. Creators will be given tools to mint, sell and also display their unique NFT creations. The platform Binance believes that the NFT hype is here to say.

“It’s interesting to observe that the hype was driven in equal parts by creators/fans embracing this newfangled technology, and on the flip side, mainstream media who is desperately trying to understand why anyone would spend meaningful money on easily replicable digital assets”

NFT’s sure has captured the imagination of the mainstream audience and in a way, it is now becoming a popular trend. There are some passionate NFT lovers and fans on one side who believe that the market is still hugely untapped and on the other hand a group of naysayers who still do not get why anyone would spend on easily replicable digital assets. But NFT peaked this year in May and still doing well because slowly yet surely it is finding takers. The magnitude of NFT transaction volumes also are higher than before and it is important that larger organizations like Binance proffer a useful platform.

Binance is aware that the pandemic has shifted perspectives to digital platforms. Digital goods now are used in multiple ways in order to engage with fans and create monetization out of it. Gen Z’s from the era of hi-tech appts and devices have embraced newer trends and have been responsible for the immense hype and popularity.

By foraying into this, Binance surely believes that the evolution of digital goods will be on the blockchain, and with them now taking lead, NFTs are sure to amplify in terms of popularity.

Bitcoin Mining Council made its debut on June 10 and is backed by Micheal Saylor, an American entrepreneur with strong roots in the crypto space. This council will act as an open forum for Bitcoin miners, which couldn’t have come at a better time as miners face backlash for extensive energy use.

The idea behind the council is to promote transparency, create a global community, deploy best practices and educate the masses about the benefits of Bitcoin. According to BMC’s website, this initiative is backed by nine companies, including Micro Strategy, BlockCap, Galaxy Digital, and Marathon.

“The Bitcoin Mining Council is a voluntary and open forum of Bitcoin miners committed to the network and its core principles,” MicroStrategy Inc. CEO Michael Saylor, and one of the founders of the council, wrote on Twitter. “Join us.”

This council will help address the claims of several leaders that suggest that the carbon footprint of Bitcoin and other cryptocurrencies mining is extensive and needs to be controlled. Among the leaders, Elon Musk is one name that shines brighter than others because of his controversial tweets.

Musk tweeted a few weeks back about his plans to stop accepting Bitcoin for his EV company Tesla which sent Bitcoin tumbling down to one of the lowest prices seen in years. Apparently, this decision was made because of the environmental concerns of Bitcoin’s carbon footprint and will start accepting the currency once it transitions to a more sustainable method.

However, much to the surprise of several experts, Musk tweeted that he had “potentially promising talks” ‘with North American miners on energy conservation, hinting at his involvement in the BMC. However, BMC categorically stated that Musk’s extent of involvement with the council was joining an “educational call”.

While the Bitcoin Mining Council is free to join for anyone that believes in the ideology of Bitcoin, Musk does not have any official position in the council. The founding members will cover the cost of onboarding and operating expenses for the first year.

“Any excess funding will be given back to Bitcoin core development through established organizations,” The website mentioned.

Cryption Network, a DeFi platform, recently announced the successful completion of its first IDO. This IDO was held at two platforms simultaneously at Ignition by PAID Network and Poolz. It was an instant success and was sold out in a few minutes. This IDO was an exciting event for the Cryption and crypto community as it helped Cryption Network take a step further in promoting crypto adoption.

IDOs are a great way to create hype about the platform and get users to invest in the project early on by incentivizing using rewards.

Cryption launched its IDO on Ignition and Poolz on 8th June at 11 AM UTC The whitelisting process was open for the masses including investors The IDO was followed by the launch of $CNT token on Uniswap and DFYN approximately an hour after the IDO was launched.

What makes Cryption stand out?

Cryption Network aims to make DeFi more accessible to the masses and promote adoption in retail investors by simplifying the onboarding process. Early last month it announced PolyDex as a part of its network. With this, it aims to take steps in solving new and old challenges of the DeFi world. PolyDEX will be instrumental in increasing crypto adoption, especially for the masses. PolyDEX, a cross-chain gasless AMM DEX will be coming later this month. Stay tuned for more such exciting projects by Cryption.

Gasless transactions – For every Ethereum transaction, the users pay in Ether as gas fees. But thanks to PolyDEX there will be no gas fees in addition to creating a sustainable ecosystem.

User Friendly – The platform ensures that UIs are no more complex making it hard for the masses to enter. PolyDEX is a user-friendly UI that will provide a seamless transition.

One-Sided Liquidity – Every investor can add liquidity and participate in farms by using one side of the pair.

It is a promising investment opportunity as evident from the successful IDO launch. Cryption Twitter and Telegram community have grown considerably in a few months, depicting their limitless potential and trustworthiness. The platform has formed several strategic partnerships with leading crypto players in the industry such as MahaDAO, Unilend Finance, The Dapp List, etc. to provide the best services possible.

Investors can also monitor the tokens and other details about Cryption Network on its Dextools.

In the proposal, President Bukele also asked the Salvadoran government to accept the US Dollar as legal tender alongside Bitcoin. According to the law, “all economic agents shall accept bitcoin as a form of payment when it is offered by the purchaser of a good or service.” Apart from Bitcoin being used as an accepted payment method for sale or purchase, it can also be used to make tax payments.

Giving a currency legal tender means borrowers can use it to repay debts officially. However, it doesn’t necessarily mean that a business is required by law to accept that currency as a payment.

What does it mean for Bitcoin?

While several central banks worldwide have positively reacted to Bitcoin and other cryptocurrencies, they are yet to embrace them partly due to the feared volatility. As evident from the past few months, the price trend of any cryptocurrencies cannot be predicted accurately, which stops the central banks from legally accepting cryptos.

Besides speed, cryptocurrencies have several advantages over fiat currencies, with the major one being no requirement for a bank account. Not requiring a bank account can help several underdeveloped communities, such as El Salvador, use the latest financial services with ease.

Central banks are not blind to these advantages and have taken a step towards global adoption. The Federal Reserve Chairman recently announced the Central Bank’s plan to publish a paper containing the pros and cons of the Digital US dollar.

With exciting news and advancements like these, it is only a matter of time that cryptocurrencies are globally accepted as a legal payment method.

NFTs are all the hype right now, and everyone wants to be a part of it. Several entities already leveraged the early-bird access to join the NFT community, but others are starting to realize the potential. As they say, it’s never too late, and that’s what Sotheby, Playboy, and other companies believe.

Starting with Playboy, the entertainment and lifestyle magazine famous for its quirky approach, among other things, decided to join the NFT race and launch its first NFT collection. The NFT collection includes five animated NFTs that will be launched on a new NFT marketplace Raretoshi.

Playboy unveiled the NFTs at the 2021 Bitcoin Miami Conference on June 3. All of the NFTs are one-of-one editions and include:

Collectors have to bid for the collectibles using Liquid Bitcoin (L-BTC), a type of asset pegged 1:1 with Bitcoin on Blockstream’s Liquid Sidechain where Raretoshi is built. The highest starting price of the bid is 5 L-BTC, which roughly amounts to $188,315 for the boarding pass, which will include a round-trip flight on the Big Bunny Jet anywhere in the U.S. for the collector and his ten guests.

The subsidiary of game developer Animoca Brands, The International Olympic Committee, has dropped a set of Olympic-themed tokenized NFT pins and a video game. The game will be launched as the lead-up to the 2022 Beijing Olympic Winter games and help players win free Olympic NFT collectibles on winning the game.

Sotheby’s art auction house plans to auction off the first-ever intelligent NFT (iNFT) and is accepting the bids till June 11. The one-of-one iNFT represents an ERC-721 tokenized female robot dubbed “Alice.” It is developed by Robert Alice in collaboration with robotics firm Alethea AI.

The description of Alice on the project’s website “thefirstinft” says, “The first iNFT ever made, this iNFT stands at the genesis of a new medium. The collector will add to their collection this historic iNFT which will refine and develop based on their questions,”

In other news, a Melbourne-based digital artist known as “Hipworth” on Twitter has created a one-of-one NFT collection. All the proceeds from the auction of the NFT will go towards Sydney’s Children’s Hospital. It is not the first and definitely not the last incident in which NFTs are being used for charity purposes. 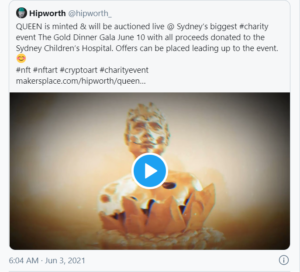