Blockchained India and Blockumen studios presented the Blockchain Hackathon of India Dapp Fest, 2019 which kick-started on Wednesday. It is taking place at IndiQube Alpha building, Varthur Hubli in Bengaluru.

Several eminent speakers and mentors participated in this event. The first day started with a workshop on hacking, and over 90 participants attended this workshop. The first day was all about getting to know each other, and each one was supposed to share about their expectations out of attending this event. Most of them were very excited and wanted to explore in depth about blockchain ecosystem with India Dapp fest.

The first session was the ice breaker round, followed by a networking session. This session was all about the network, which was followed by introducing the eminent sponsors of the event. Pioneers from the core companies in the field like Matic Network and Algorand blockchain project talked to the participants about their journey in the field of blockchains and how they were able to create a name for themselves. It was a walk through their successful journey.

Co-Founder and CEO of Matic Network, Mr. Jayanti Kanani, along with the VP of Marketing, Mr. Chandresh, spoke to the participants on the current trends and state of their venture. They talked about all the support they have been receiving from industry leaders of Binance and coinbase cryptocurrency exchange.

Gokul B Alex, who is the Brand Ambassador at Algorand which was founded by Silvio Micali who himself was a Turing Award-winning cryptographer, talked all about Algorand. He explained how it worked and how it acted as a better-distributed ledger, it’s scalability and the proof of work it has been doing all this while. He also talks about how they have been redefining the standards of blockchain technology.

The workshop on Algorand and Matic Network took place under the guidance of Naveed, Head of Engineering at Algorand for Algorand blockchain project and Mr. Ravindra Kumar who is the CTO at Instadapp for Matic Network. 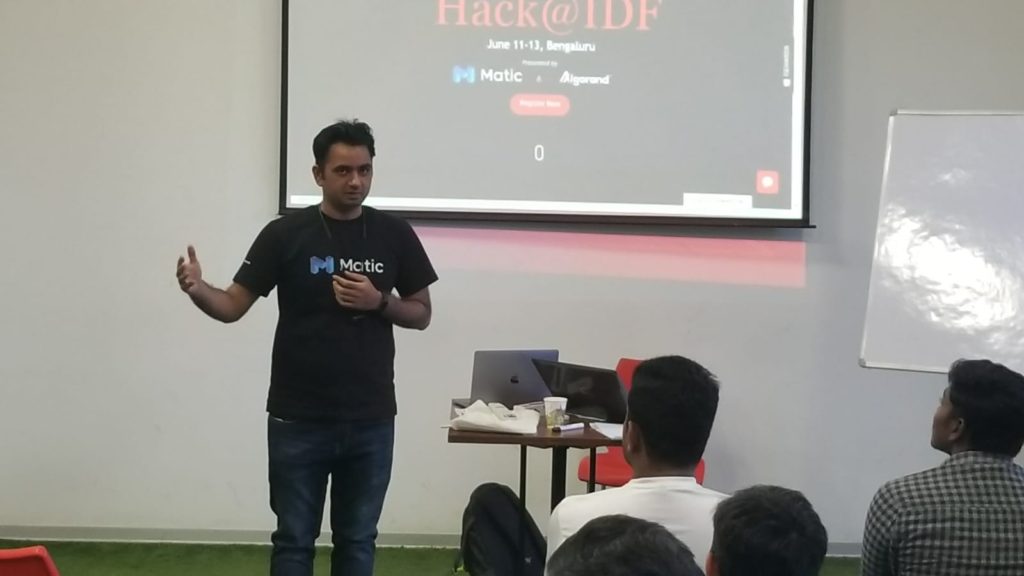 Some of the other recognized sponsors include:

As a part of the next session, all the sponsors were introduced. After which Team India Dapp Fest introduced the brains and the brawn behind the fest itself. Blockhained India and Blockumen Studios get the credit for organizing such a huge blockchain event.

After a sumptuous meal, all the guidelines of the hackathon was shared with the enthusiastic participants who couldn’t wait to kick start the hackathon.