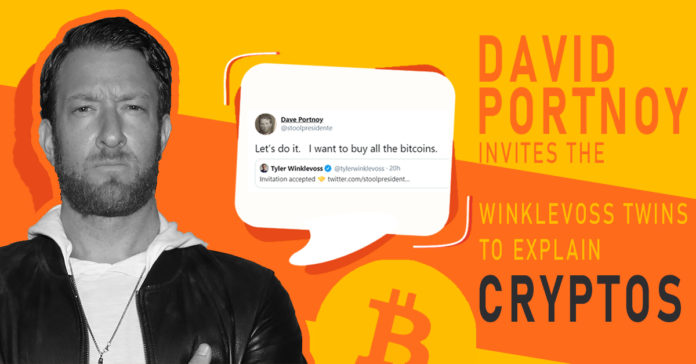 Looks like everyone’s now interested in cryptocurrencies, and especially after Bitcoin took off like a master surpassing the $11,000 figure, people have become interested in adding to their knowledge of cryptocurrencies. One such fervent and enthusiastic person wishing to learn everything there is about cryptos and Bitcoin, is David Scott Portnoy. David is a noted American internet celebrity, blogger, and the founder of the Sports and Pop culture blog Barstool Sports.

He posted a video on his Twitter account inviting the Winklevoss twins to his office to explain to him the fundamentals of cryptocurrency. The founder and CEO have to date maintained some real impractical stance on Bitcoin. After he set out his video invitation, he also tweeted that he would ‘buy all bitcoins’ if the twins would accept his invitation and educate him about cryptos.

Tyler Winklevoss has replied to the tweet by accepting the invitation.

In the video, Portnoy talked about the obstacles he faces with Bitcoin and why he does not want to invest in it. He mentioned that complexities associated with Bitcoin have been a downer for him, especially the convoluted and cobwebbed ‘martian language’ involved in hardware wallet password formation.

It has always been a matter of extreme stress and worry to keep the hardware wallet safe. Even a slight miss could mean that they run the risk of losing all that they own in their wallet in case the hardware wallet gets stolen or lost. It is not that David is new to this entire scene for he had invested in Bitcoin in its early days but lost his investment worth $20,000.

Despite this, he is still not averse to the idea of pouring in investments if he gets a luminous and comprehensible version of Bitcoin helping him understand it better. He also went on to compare BTC mining to the popular game Mario Bros and mentioned that it is the twins who carried the expertise that ruled the roost in the system. There is no specific reason as to why he chose the twins but he sure is a fan of their movies.

Now he has surely poked fun on the twins but the invitation has been accepted. Now what will follow is sure to create a buzz in the crypto industry. So, let’s wait and watch.