Cryptocurrency price analysis for the 3rd week of October

The week kicked off on a bullish trajectory, breaking the $6,600 resistance to a new high of $7780 on October 15.The pair registered an average gain of about 20% before taking a sharp drop on October 17. The fall was attributed to tax avoidance efforts born out of a requirement to file tax returns on BTC which had earlier been classified as property rather than currency. This led to the mass sale offs by people hodling onto BTC to avoid incurring a lot of taxes.

Prices throughout the week ranged from $6,200 to $6800 as seen in the chart (A to C) say for October 15 when they sky dived above the $6,800 support (point B). However, price analysis charts for the BTC/USD on October 15 indicated a price rally that seemed to point to a break from the $6,600 support level.

Were the slow dip to persist, new support levels could lay at between $6,200 and $6,000. On one day charts, the 9 day EMA crossed over the 30 day EMA indicating a bullish trajectory with the 9 day moving average acting as support for the bullish trend.

The pair kicked off the week on a bullish trajectory following in a dead cat bounce situation arising from the pair’s previous week performance. Support was at $0.4586 and resistance at $0.5. On October 15 however, a new month-high of $0.5250 was registered, breaking the $0.5 resistance barrier. This was due to an IRS requirement to file income tax on digital tokens held, including Ripple. Investors looked to dispose coins held to avoid mass taxes.

The bulls went on for half of the week before registering a slow downward spiral on October 17 due to increased supply in the market. Prices oscillated between $0.49 and $0.43 apart from when resistance was broken. The 9 day EMA crossed over the 30 day moving average, signaling a bullish trend. 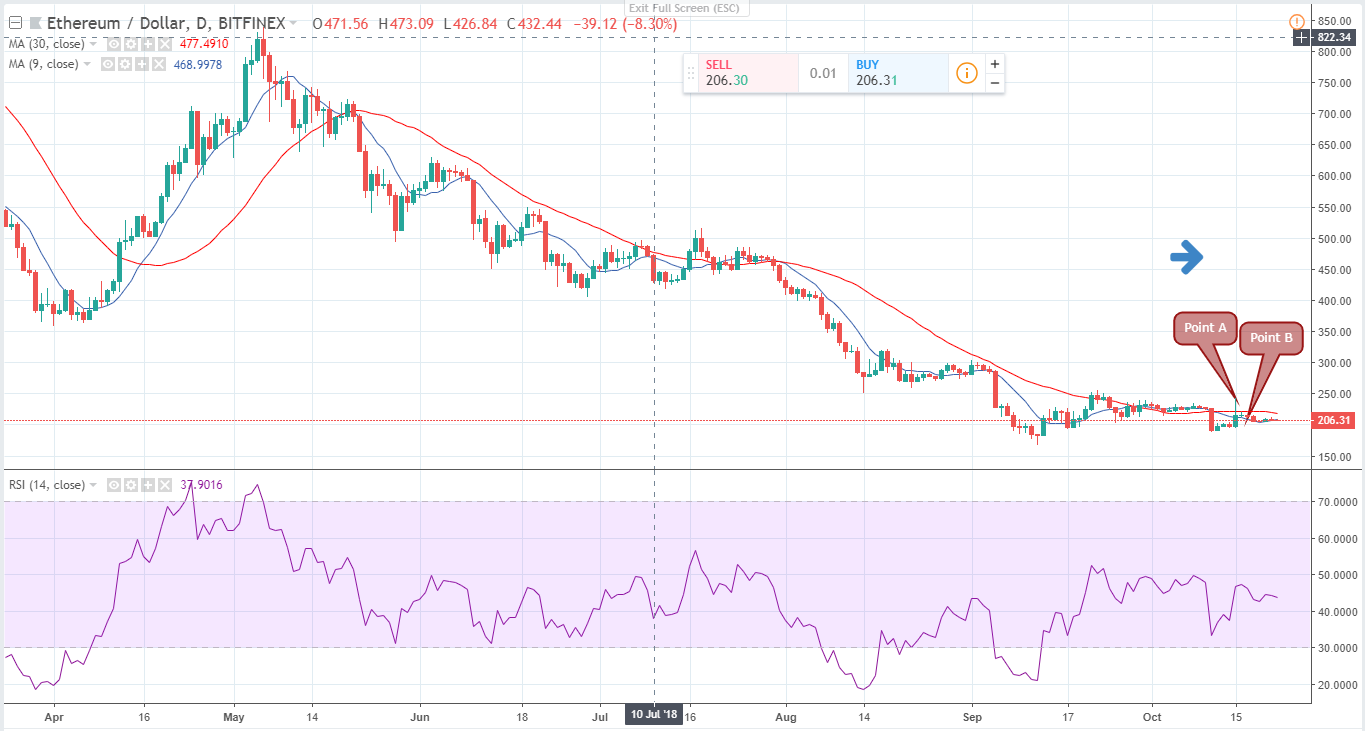 The pair similarly kicked off the week on a bullish trend that was the consequence of the previous week’s dead-cat bounce. However, an IRS requirement to file tax on all digital tokens held led to mass dispositions which saw prices shoot(point A) on October 15 before taking a slow dip on October 17 (point B).

Support levels throughout the week were at the $206 mark and resistance at the $219 mark. The latter was breached on October 15 to a new high of $242. The 9 day Moving average crossed over the 30 day moving average at the beginning of the week, indicating a bullish trend.

Interested in other cool crypto content? Check out Interview with Q: The cryptocurrency trading BOT maker and Wanchain: One chain to rule them all?