Consumer technology is meant to make its users’ lives more comfortable, but its lack of security can endanger said users’ privacy and safety. Take Zoom’s recent security breach, for example — hackers were able to get a hold of over half a million people’s login credentials and sold them for a penny or gave them away for free.

Likewise, Google and Apple announced their partnership a few months ago with a plan to trace COVID-19 via people’s phones. Their app immediately raised concerns amongst experts about privacy. Consumers are also growing rightfully wary about how much Facebook tracks its users’ activities off-app, and datasets from two third-party Facebook apps were exposed to the general internet in 2019.

The internet landscape is not nearly as secure as it should be. Fortunately, technologies exist that can help protect users’ data as the internet becomes more involved in daily life.

So, What’s the Problem?

For this transition to happen safely and smoothly, though, we need secure, reliable infrastructure — which does not currently exist.

This is where decentralized applications (DApps) present a solution. DApps are similar to apps that most people are familiar with, but they exist on distributed networks (e.g., blockchain). They can supply the demand for reliable infrastructure and ensure secure online operations, but they face a few hurdles before they’re ready for mainstream use.

One such obstacle is their insufficient scalability. Network consensus to validate data requires complicated protocols, which, in turn, necessitates a great deal of foresight. Developers often need to develop DApps while anticipating how many people will use them, which makes updating them and improving transaction speeds extremely difficult.

DApps’ UX is lacking as well; they are often not user-friendly and complicate matters further. Crypto-space jargon is often too difficult for laypeople to understand. While DApps have made significant UX progress in recent years from a programmer’s point of view, they remain alien to the general public, which dramatically impedes their ability to revolutionize cybersecurity the way developers hope.

Transactions across DApps are also challenging. Two users that want to trade a particular cryptocurrency can do so on the coin’s native blockchain, but what if that blockchain is frustratingly slow? There might even be a change in price by the time the transaction is complete. The transactors can try to use a different blockchain known for its faster speeds, but means of moving a cryptocurrency onto a chain that doesn’t support it are cumbersome.

There is, however, a platform that accounts for many DApp caveats. A company by the name of Swingby enables cross-chain exchanges with unprecedented ease and security.

In the traditional model, a person who wanted to trade Bitcoin on the Ethereum blockchain (possibly to take advantage of its speed; the Bitcoin blockchain is frequently congested with traffic) would need to convert their Bitcoin into a different, Ethereum-supported cryptocurrency and go through a third-party custodian.

This process is lengthy — by the time the cryptocurrency is converted back into bitcoin on its original chain, it almost defeats the purpose of transferring to Ethereum, and the bitcoin holder loses its price exposure.

Swingby created a network it dubs “Skybridge,” which enables non-custodial cryptocurrency exchanges between all ECDSA-based blockchains (such as Binance, and soon Ethereum).

It leverages pegged 1:1 swaps so that users don’t need to convert their tokens to a different blockchain’s native currency before transferring to said chain, allowing them to maintain their price exposure to market movements. Various blockchains also charge lower transaction fees, so users would be able to pay fees they find more appropriate for different features.

The positive ramifications of such a platform are wide-reaching. Cryptocurrency holders would be able to use DApps, DeFi services, and decentralized exchanges on blockchains that don’t natively support them.

They would have a fast, affordable, and secure way to trade tokens and utilize DApps that allows them to maintain their privacy. Skybridge also has the potential to decongest multiple blockchains because people would be able to use whichever chain they wanted, thus indirectly enhancing transaction speeds.

The Future of Security

The world needs robust digital security. Security is especially crucial in a time where more and more tasks are forced online and people store their private information on the Web. DApps can provide this, if only they were able to operate across different peer-to-peer networks.

Swingby makes this possible. Simplifying the overall cross-chain process will push DApps into the mainstream, make them more accessible for everyone, and create an online space where truly secure transactions can take place. 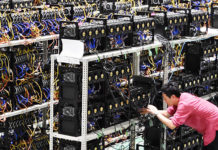 Hashpower migration from East to West could be a possibility

Elon Musk of Tesla and Dogecoin launches astronauts into the orbit